Nowadays most of us spend most of our lives in an office type environment.

The idea of an effective work environment has always been present and yet often rarely discussed or analysed by most of us, myself included. I just know what I like and often modify my surroundings to make the best from a less than ideal situation.

The old school office/cubicles strategy, was rooted in hierarchy and even class structure. The “us and them” school of though between “management” and “labour”, yet it did allow for personal and private spaces which meant an inherent feeling of safety and ownership.

The open plan strategy, has its ideology based in the “we are a team” and “we are all the same” mindset. These ideas have issues in a work place; the bigger the team the more difficult to find harmony and we are not all the same. The funniest thing about the open plan office space is that a major reason for its popularity is not to develop an effective work environment but that its cheaper per headcount by easily fit more staff into smaller spaces and also that you can see everyone, giving the illusion of control.

The simple fact is that we often ignore or actively block out our environment be it work or otherwise. Details of our environment and how they effect our mental state, often go unnoticed and therefore are allowed to impact us without being monitored or adjusted.

How many of us remember the office spaces of our past and television sitcoms, cubicles, isolated offices and founded in the “us and them mentality”. Nowadays, we have the antithesis, being touted as the best option, the open plan, no partitions idea of office space. The driving force behind each extreme model, is only partly based in trying to allow for effective work.

The irony is that, as humans we need interactions with others and also our private space. Much like marine fish in a fish tank, I’ll get back to this later.

The traditional office space of the decades past, was one of higher management nested in largish offices around a space of partitioned cubicles. This lay out although not great had it’s merits. The physical barriers allowed the occupants to have a sense of private space and belonging. The ocean of cubicles provided a pocketed approach to office space, reminiscent of battery hens. Each isolated and working to produce, under the watchful eye of the farmer/manager.

As time and ideas changed the partitions got smaller in height and less common, the offices reduced in number and common areas began to spring up. The idea of this was to remove the barriers physically and hopefully mentally from the work space to allow for communication and a sense of community and partnership, to hopefully evolve.

The interesting fact is that different cultures behave differently but people tend to require the same things.

Ironically as the physical barriers, like walls and partitions, have been reduced or completely removed others have been erected to fill a need. The partitions have gone but the need for private spaces has meant that isolationist devices have become common place. The modern office space is open plan and headset isolated. The human need for self-space has replaced the partitioned cubicles with the modern cultural equivalent of isolation tanks.

The supposedly open office to encourage freedom and so we can have a sense of community and belonging has gone full circle to the isolationist mentality of boxes.
The mental isolation in the modern open plan work space is, far more detrimental than the cubicles of old and more difficult to see.

Personally I felt happier in cubicles, with lowish partitions and one glass partition so natural light could be allowed further into the room. The partitions were set out in blocks of four or six and sometimes even eight, allowing for team groupings and interactions.

The partition walls were low enough to see over, when you were standing but high enough to utilise them as extra work surfaces for charts and the tracking of work in progress. The sense of privacy was there and you also had a sense of belonging. You could hear others if you wished to focus or easily ignore the office murmurs.

If you have ever kept a marine aquarium or any fish tank for that matter there is a paradox which occurs when stocking your aquarium.
“The more hiding places there are the more you see your fish and the less stressed they are.”
In a marine environment fish are constantly on the look out for predators and prey alike, always aware and highly observant. The fish in a tank are no different, being exposed is stressful and a bad thing. A stark and barren environment, is a terrifying place and that is why fish kept in these conditions are rarely seen and often found cowering in what few corners or hiding spots there are. An aquarium with lots of hiding spots and ample swim throughs will make the inhabitants feel safe since they can always dart into a secluded spot, when danger is felt.

Maybe we should bare this in mind when designing work spaces.

A final thought is that traditionally homes are designed with common areas, lounge and living rooms, common rooms for eating and cooking and most importantly private zones the bedrooms.

Efficiency is not a good goal, effectiveness is a better goal. 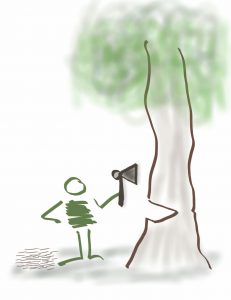 What do we mean by being efficient? In simple terms it means doing a good job, a job that has the intended outcome with the minimal amount of effort. At an organisational level this is usually interpreted as saving costs and that can lead to what I would call some ‘cheap and nasty’ outcomes.

So we have started to rebel against the cost-cutting aspects of efficiency and are now very focused on effective outcomes…almost to the point that using the word ‘efficient’ is not really acceptable.

We can be both effective and efficient, and we should be. It’s a good idea to monitor for opportunities to reduce waste, while being selective about which types of waste make sense to keep or reduce.

The one place that it makes sense to be less efficient is when we are tackling complexity. This requires a probing, exploratory approach which can actually be more effective when it is not super-efficient…because we are looking for things which we are uncertain about. 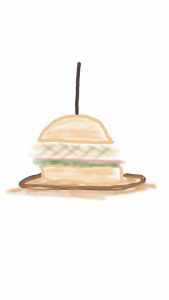 So we all know about stakeholders…those people that care about what we are doing and should have a say in what happens.

What does the ‘stake’ mean when we refer to the stakeholder? According to Wikipedia, the term originally referred to the person who temporarily held the stakes from a wager until the outcome was determined. Business has since co-opted the term to mean people interested or impacted by the outcome of a project.

Tobbe and I were having burgers for lunch today…they were so tall that they had skewers in them to keep them together. So the chef held the skewer (stake) and we held the skewer when we ate the lunch, but the person serving us never touched the skewer…just the plate that supported the burger with the skewer in it.

That got us thinking about what supports the interests of the stakeholders, and yet, is not a stakeholder of a project or outcome?

It may be what we call governance. The scaffolding in an organisation that ensures that business interests are looked after…ensuring that our burgers arrive safely and without toppling over onto the floor.