Governance is a word that throws me off – wondering what it really means.

It’s supposed to mean having clarified roles, accountability and responsibilities.
It means understanding how decisions get made and who makes them.
It means making sure that policies are in place and that processes are monitored to ensure that they are working as intended.

It’s tricky to explain governance in agile when people don’t already have a good grasp of governance in traditional organisational constructs.

It’s similar to when I was a new video editor and our organisation bought a fancy piece of equipment called an ADO – Ampex Digital Optics (It flew a small picture around the screen and cost over $100k AUD in the 1980’s/90’s…now you can do the same thing with free software).
We did not purchase the training reference materials and only had the operating manual – which kept stating to do this, that, or the other with a thing called a ‘keyframe’.
I had no idea what this keyframe thing was – and the glossary was not helpful – so I stressed and tried a few things – and eventually called another video editor who was more experienced and asked him.
He explained that in any movement from point A to point B, the key frames would be the start and end point (so you basically put the small picture into the spot you wanted it to start at and press the ‘keyframe’ button and then move it to point B and hit ‘keyframe’ again – then the small picture would move from point A to point B whenever the effect was run). 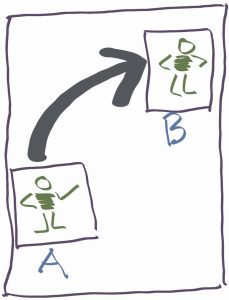 Once I understood what a keyframe actually was, the whole machine was unlocked and I could use all of the features – but until I understood it, I could not even start to use this very expensive machine.

Back to governance and agile – when we understand how decisions get made – it’s quite easy to translate roles such as Product Owner into an organisation – the same decisions are being made – we are packaging them in a different way in agile teams.

When governance is not well understood, we end up circling around definitions for Product Owner etc – we are already causing confusion by introducing a completely different way of working. And on top of that, we need to break apart the decisions, accountabilities and responsibilities and place them into the daily planning, checking and doing aspects of agile delivery.

A way forward is to spend some time ensuring that the governance principles are better understood for the pre-agile ways of working and only after that, attempt to translate into the agile context. It feels like taking a step backwards – and it is much better than going around in circles and talking at cross-purposes.

If governance was never really there in the first place – this is one reason for the impression that governance is absent in agile.