This post has been inspired by a conversation about culture with Tobbe and Steve.

I was pondering why I have trouble with the word ‘Culture’ and it’s related to the ways we misinterpret words and misuse them to influence people.
So I tweeted a thread earlier this week which captures some of the problems

Culture can be a vexing word

In this context ‘vexing’ means causing annoyance, frustration or worry (from the google dictionary)

The word ‘Culture’ is frustrating when we try to define it
‘We need to change the culture’
…..’What do you mean by culture?’
‘You know – how we do things around here’
…..’What things?’
‘How we communicate, interact, collaborate…’
……..
…
…..’What is collaboration?’

And the word ‘Culture’ is worrying because it can lead to rabbit holes, wild goose chases and cans of worms It’s far too easy to focus on activities attempting to change the culture directly (and these are very hard to measure – see previous tweet about definition)

It’s very easy to vent about an issue and a lot trickier to propose ways to address these issues.
The simplest first idea is to stop spending large amounts of time trying to define culture – sometimes it’s like…discussion about culture eats everything else…(with apologies to Drucker – although according to Quote Investigator the quote might not be directly from Drucker). 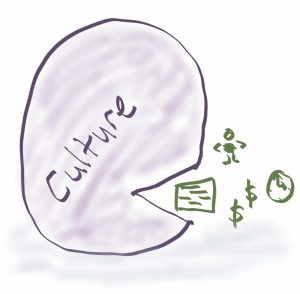 The next simple idea is to catch ourselves when we think ‘the culture needs to change….’ or similar and apply something like the 5 Whys to it.

We can see that the list of whys and who might know is getting very long and there are a lot of interesting and branching threads to explore. The timesheet one can be fairly simple to follow and it often ultimately relates to how an organisation does its accounts as well as allowing us to get paid properly. Accounting standards are fairly universal and are not going to change very quickly – so we are much better off educating ourselves about the need of the organisation to meet taxation, corporate governance, audit etc. requirements and finding more effective ways to achieve these as well as communicating this need with our colleagues.

We might find that a very measurable thing (that an organisation is a going concern in accounting speak) can have a dramatic impact on culture when we focus on flowing our work around that need.