Expanding the thoughts behind a recent tweet of mine.

‘Pondering….less obvious reasons…generate ‘pillows’ of assumptions…and are ineffective cushions against the sharp rocks of risk below’ 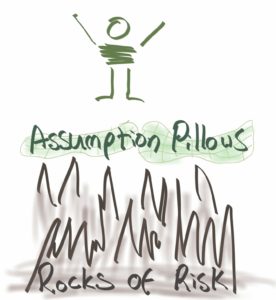 It can feel like a waste of effort to inspect our assumptions – there are ways of working them into a workshop facilitation plan – that’s the easiest one to address.

Another way is to be aware of the feeling that something is not quite right in a conversation. Once I was negotiating a contract and almost starting to argue with the other party about a particular point – both of us thought that the other one was being a bit unreasonable. After a short break, we took a moment to clarify what we were discussing and it turned out that we both agreed the point, but had been discussing quite different things before the short break.

The main risk that assumptions cause in projects is delay. If we find ways to highlight assumptions earlier we can save wasted effort in circular discussions, rework or duplication.

It’s better to see the sharp rocks of risk than to cover them with assumption pillows.